What a difference a year makes. At this time last year the U.S. Federal Reserve, “the Fed”, had just raised the federal funds rate, the most important benchmark for short-term rates, by 0.25% to 1.75%. The new Fed Chairman, Jerome Powell had taken the reins a few months prior from the previous Chairwoman Janet Yellen. Powell seemed determined to continue on the path toward monetary policy “normalization”. Normalization has become the term used to describe the Fed raising rates from emergency low levels and the process of decreasing the size of the Fed’s now enormous balance sheet. Powell is the first Chairman appointed since the 1970s to not hold a Ph.D. in Economics. Market participants were looking forward to having a pragmatist for a Fed Chair, someone who could speak in plain English and that would rely more on data for guidance rather than the uncertainty of some economic theory. Powell and the other Federal Open Market Committee (FOMC) members’ forecast was for three more hikes throughout the rest of 2018 and for three more in 2019.

The outlook for the U.S. economy at the time was for continued strong growth. Indeed, second quarter economic growth would turn out to be 4.2%, the first time over 4% since 2014. It all seemed quite promising. There was really only one snag, unfortunately outside of the U.S., conditions were not turning out so well.

Global equities, excluding the United States, had peaked early in the first quarter of 2018 along with the U.S. Financial and Materials Sectors (two groups highly integrated with the global economy). By midsummer the MSCI AC World ex USA Index and the U.S. Financial Sector Index were both negative by double digits. The Shanghai Shenzhen CSI 300 Index, considered a blue-chip index for mainland China was getting crushed, down -24%, the Euro had depreciated 7.5% against the US dollar and European financials were more than 15% negative by the end of June. The popular synchronized global growth narrative was falling apart. 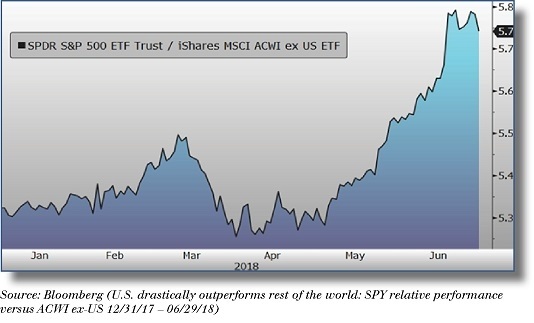 THE FED CONTINUES TO NORMALIZE AS MARKETS BECOME TURBULENT

As the rest of world was misfiring on many fronts, equity markets here in the United States were on a positive footing. Since the November election of 2016, U.S. equities had been on a phenomenal run, with the S&P 500 Index gaining just over 32% by June 2018. Given the added cover of fiscal stimulus in the form of corporate tax cuts, Jerome Powell and the FOMC were steadfastly marching on towards the path of normalization. By the end of June, the Fed had managed to raise the funds rate from just 0.5% up to 2% within a period of 18 months. Interest rates across the curve were steadily moving higher but with short-term rates moving up more than longer-term rates, often seen as an unhealthy signal. Then came the fourth quarter. 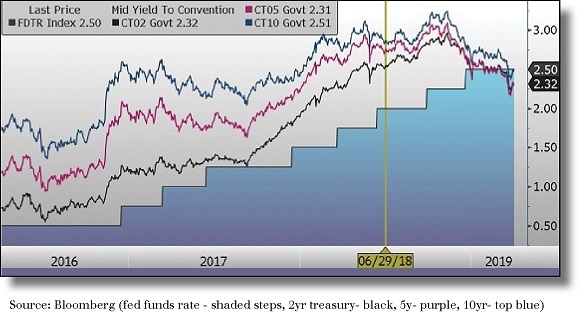 Almost on cue at the start of the fourth quarter, U.S. Equity Markets started to slip. As stocks traded down throughout the last months of the year, cries began to ring out for Powell and the Fed to slow down with their potentially aggressive path to normalization. Heading into the December 19th FOMC meeting, the S&P 500 had already declined -11% off its high the first week in October. Despite the sudden drop in U.S. equities, the Fed executed their fourth rate hike of the year, bringing the funds rate to 2.5%. And just to make matters worse, in response to a question regarding the autopilot process by which the Fed was decreasing the size of its balance sheet, nearly $50 billion a month, Powell responded by saying, “I think that the runoff of the balance has been smooth and has served its purpose and I don’t see us changing that”, and that “interest rates would continue to be the active tool of monetary policy”. To say markets didn’t like this response would be putting it mildly. The S&P would drop more than 7% in the next three trading days. Then came the pivot.

THE FED PIVOTS FROM “NORMALIZATION” TO “PATIENCE”

Just two and a half weeks later, on a chilly Friday in January during a panel discussion with two of his predecessors, the Fed Chairman began to walk back his comments. He stated that the U.S. economy still had good momentum but that the central bank would be “patient” about raising interest rates. He sighted that tame inflation readings would allow them to be, “patient as we watch to see how the economy evolves.” Regarding the balance sheet runoff Powell made the comments, “We’re always prepared to shift the stance of policy and to shift it significantly if necessary.” That seemed to be exactly the medicine the markets wanted, we were off to the races! Over the following 35 trading days the S&P 500 would see only 9 down days versus 26 up days and would gain more than 15%. And the gains would keep on coming as the Fed would continue to pivot away from its former monetary policy “normalization” campaign. At the January meeting they highlighted risks from Europe and China, but insisted the underlying U.S. economy was still healthy. But by the March meeting, they had completed the pivot. The Fed’s forward guidance suggests zero hikes for 2019 as well as the declaration to stop the decline of the balance sheet in September.

There are certainly many risks out there; however, U.S. equity and credit markets have been resilient, the economy just created another 196,000 jobs in March, and we seem now to have the Central Bank resolved to keeping interest rates low and credit easy. As investors, we are always trying to spot that policy mistake by the Federal Reserve. So the debate now goes on. Should they have raised in December? Should they have made this swift and clear pivot after a turbulent quarter? Maybe they’ve played it all just perfectly. Stay tuned…