Stocks retreated last week. Traders worried that the formal impeachment inquiry of President Donald Trump might distract White House officials from their pursuit of a trade deal with China, and shift the focus of Congress away from consideration of the United States-Mexico-Canada Agreement (USMCA). Also, news broke Friday that the White House was considering restricting levels of U.S. investment in Chinese firms.

Data released Friday by the Bureau of Economic Analysis showed household incomes rising 0.4% in August. Consumer spending improved just 0.1%, however; that was the smallest personal spending advance in six months.

A Slip in Consumer Confidence

The Conference Board’s Consumer Confidence Index fell to 125.1 for September. That compares to a reading of 134.2 in August. Lynn Franco, the CB’s director of economic indicators, wrote that “the escalation in trade and tariff tensions in late August appears to have rattled consumers. However, this pattern of uncertainty and volatility has persisted for much of the year and it appears confidence is plateauing.”

In contrast, the University of Michigan’s Consumer Sentiment Index ended September at 93.2, an improvement from a final August mark of 89.8.[vi],[vii]

On October 10, the Social Security Administration is scheduled to announce the 2020 cost of living adjustment (COLA) for Social Security retirement benefits. Earlier this month, Bureau of Labor Statistics yearly inflation data pointed to a possible 2020 COLA in the range of 1.6%-1.7%.[viii]

Tuesday: The Institute for Supply Management presents its September Purchasing Managers Index for the factory sector, a barometer of U.S. manufacturing health. 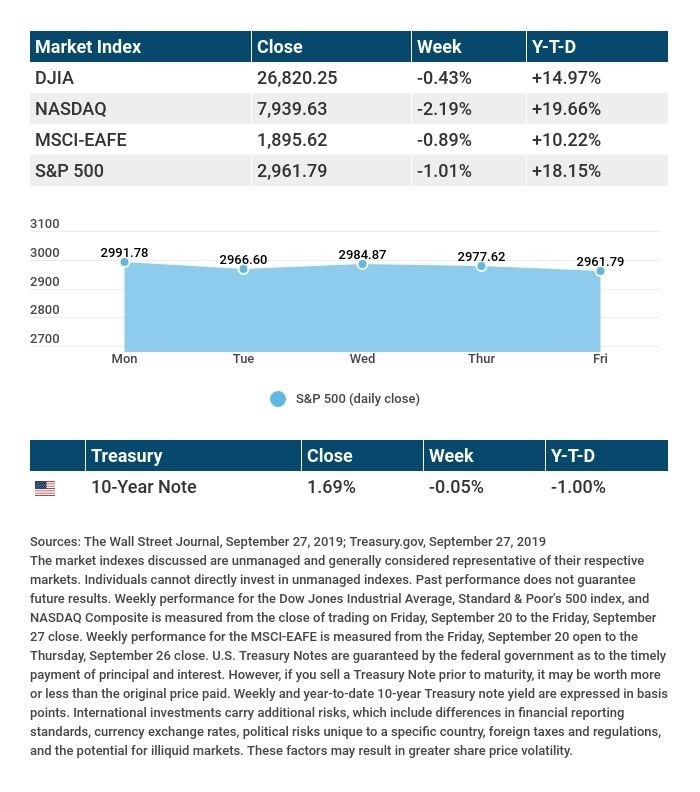