Stocks were mixed last week as worries that stretched from Washington D.C., where prospects of a new fiscal stimulus bill dimmed, to Europe, which saw an increase of new COVID-19 cases.

Dwindling chances of a federal fiscal stimulus, pre-election jitters, and worries over a second wave of coronavirus infections in Europe weighed heavily on investors.

The weakness in technology persisted. The Department of Justice proposal to curb legal protections for internet companies and require them to take greater responsibility for the content on their sites adding to that sector’s woes.[iv]

The week wasn’t entirely absent of good news. Investors focused on reports of new progress in developing a vaccine and the passage in the House of Representatives of a bipartisan continuing resolution bill to fund the government through December 11th.[v]

Absent any apparent catalyst, stocks rallied in the final days of the week, cutting losses on major indices and powering the NASDAQ Composite to a weekly gain.

Market hopes for an additional fiscal stimulus bill, which were already fading, suffered another setback as events in Washington, D.C., appeared to make it more unlikely that lawmakers and the president could come together to fashion a compromise spending bill.

Many economists and market observers, along with Federal Reserve Chairman Jerome Powell, believe that further spending may be needed to maintain the momentum of the current economic recovery. 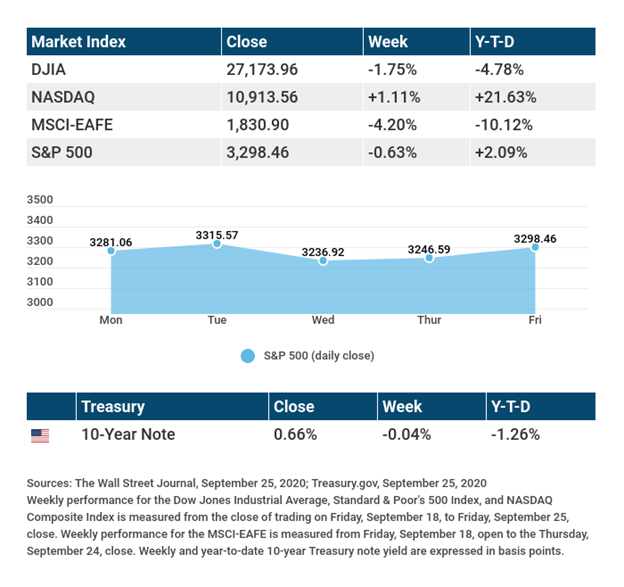