Stocks slipped as the technology sector remained under pressure and a mid-week announcement by the Federal Reserve failed to inspire investors.

As has been the case in recent weeks, technology stocks led the market higher, then lower in an otherwise turbulent week of trading.

Merger and acquisition activity announced at the start of the week generated a rush back into technology stocks, sparking a rebound from the previous week’s drop. Stocks continued to advance until Wednesday, when investors began to digest comments from the Fed’s Federal Open Market Committee meeting. The Fed delivered a message that coupled assurances of continued low rates with concerns about the health of the economic recovery.[iv]

The Fed Stays the Course

In the last Federal Open Market Committee (FOMC) meeting before the November election, the Fed signaled that interest rates would not be increased “until labor market conditions have reached levels consistent with the committee's assessments of maximum employment and inflation has risen to 2% and is on track to moderately exceed 2% for some time.”[v] Most Fed officials do not see this happening until 2023.

While the Fed maintained its view on the importance of fiscal stimulus to help American workers and businesses, it did improve its outlook for unemployment in its latest economic outlook. The Fed now expects unemployment would average around 7-8% in the final three months of the year, down from its June prediction of around 9-10%.[vi] 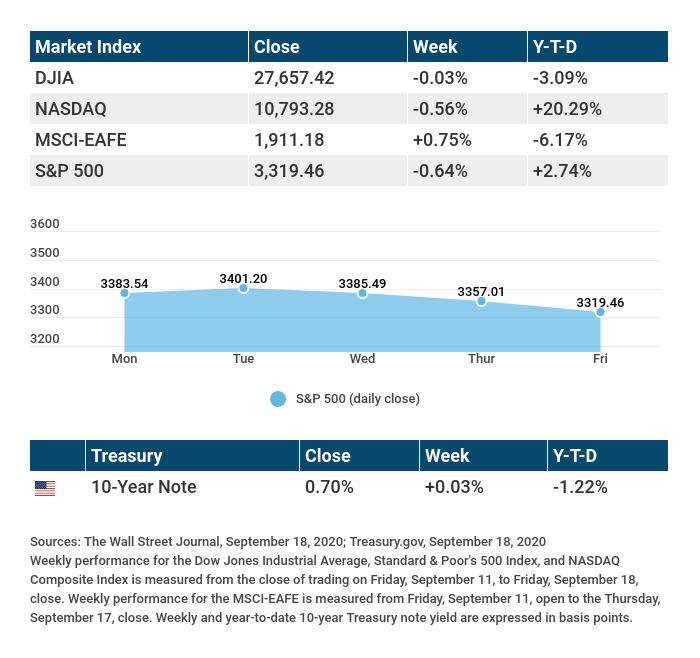