On Friday, a sharp sell-off sent major stock market indices into negative territory for the week, capping a volatile close to April. 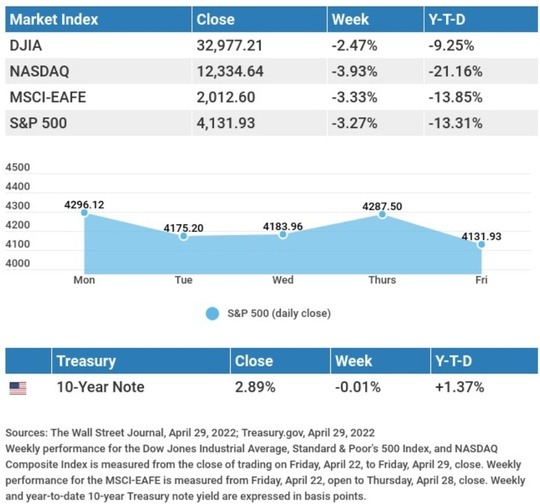 Trading was volatile in the final week of April as investors struggled with the crosscurrents of global economic growth anxieties stemming from widening COVID-related lockdowns in China and a fresh batch of corporate earnings reports.

Monday set the tone for the week. Stocks staged an intraday reversal, wiping out a deep morning decline to end the day higher. After broad losses on Tuesday and a choppy session on Wednesday, stocks mounted a powerful rally Thursday thanks to positive corporate earnings reports, overcoming a disappointing first-quarter Gross Domestic Product report. Stocks could not sustain Thursday’s momentum, as Friday witnessed a broad-based retreat to cement another week of losses.

Following the torrid 6.9% annualized GDP growth rate in the fourth quarter, economists had expected economic growth to moderate to about a one-percent gain in the first quarter. Instead, the economy shrank at an annualized rate of 1.4%, dented by a slowdown in inventory investment by businesses, a jump in the trade deficit, and a decline in defense spending.

Consumer spending held up, rising 2.7%, though the gain was amid higher prices. Some economists expect the economy to resume its expansion for the remainder of the year, which may be one reason investors shrugged off the negative surprise.4

Source: Econoday, April 29, 2022
The Econoday economic calendar lists upcoming U.S. economic data releases (including key economic indicators), Federal Reserve policy meetings, and speaking engagements of Federal Reserve officials. The content is developed from sources believed to be providing accurate information. The forecasts or forward-looking statements are based on assumptions and may not materialize. The forecasts also are subject to revision.