Deteriorating investor enthusiasm for high-valuation growth companies and a mixed start to the fourth-quarter earnings season made for a volatile week. 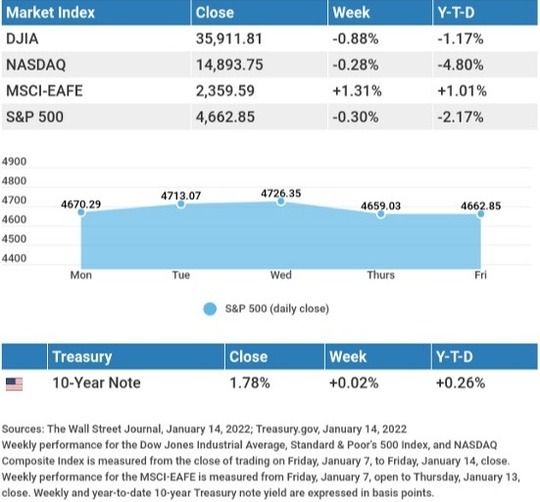 Stocks were under pressure all week as investors grappled with higher bond yields and talk of possibly four rate hikes this year. Initially, intraday declines would bring out buyers and pare the losses. Investors were particularly heartened by Fed Chair Powell’s congressional testimony on Tuesday that softened the hawkish tone found in the minutes of the Federal Open Market Committee’s December meeting.

After digesting the hot inflation reports released mid-week, stocks were unable to resist the selling pressures on Thursday. A weak retail sales number, a resumption in the rise in yields, and mixed earnings from some of the big money center banks weighed on the market during Friday’s trading.

Inflation and the Fed

Inflation reports last week continued to reflect upward momentum in consumer prices. The Consumer Price Index posted a 7.0% year-over-year jump–the biggest increase since 1982, while the Producer Price Index rose 9.7% from a year earlier–the fastest pace since 2010 when the index was reconstituted.4,5

Markets responded calmly as both numbers were in the neighborhood of expectations and the monthly increase for each moderated from previous single-month increases. The price pressures are expected to remain in the face of continuing supply chain constraints and wage growth. The pace and persistence of price increases may influence the speed at which the Fed may tighten in the year ahead.

Source: Econoday, January 14, 2022
The Econoday economic calendar lists upcoming U.S. economic data releases (including key economic indicators), Federal Reserve policy meetings, and speaking engagements of Federal Reserve officials. The content is developed from sources believed to be providing accurate information. The forecasts or forward-looking statements are based on assumptions and may not materialize. The forecasts also are subject to revision.