A hot inflation print and the growing concern of a Russian invasion of Ukraine sent stocks tumbling late in the week, leaving major indices lower for the five-trading days. 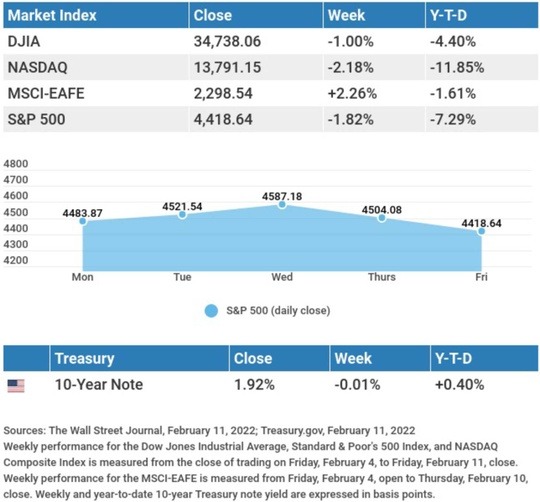 When the report hit, it showed accelerating inflation, and stocks dropped and bond yields bounded higher. Stocks managed to recover from the initial reaction to the unexpectedly high inflation number. But when the President of the Federal Reserve Bank of St. Louis commented that the Fed may consider a more aggressive move against inflation, stocks resumed their slide lower. The stock skid accelerated into Friday on White House reports that an invasion of Ukraine by Russian forces may be imminent.4

Prices of consumer goods accelerated in January, rising 0.6% from the previous month and 7.5% year-over-year. This annual inflation rate was the highest since 1982. Core inflation, which excludes the more volatile food and energy prices, was 6.0% higher from last January.5

Many economists and market analysts had expected inflation to moderate, but driven by a surge in prices of used cars, gasoline, and energy, inflation remained at elevated levels. The persistence of inflation at these heights has fueled investor concerns that the Fed might consider a more aggressive 50-basis points increase in short term interest rate.

Source: Econoday, February 11, 2022
The Econoday economic calendar lists upcoming U.S. economic data releases (including key economic indicators), Federal Reserve policy meetings, and speaking engagements of Federal Reserve officials. The content is developed from sources believed to be providing accurate information. The forecasts or forward-looking statements are based on assumptions and may not materialize. The forecasts also are subject to revision.